I was not surprised to learn that the first documented use of toilet paper was in 6th Century China. Other sources say it was the 14th century but I don’t believe for one minute that enterprising Chinese took so long to invent something so obviously indispensable… Europe in this period was still wallowing in the 100 years war, the Black Death and, the Great Famine but, in china it was the beginning of the Ming dynasty. Oh yeah I can imagine the great Emperor wiping his royal derriere with leaves from the local Tea plantation...NOT! Of all the things China has been credited with inventing I am glad of this one thing about toilet paper; Over the centuries I am thankful that paper has CONTINUED to be thought THE most superior of mediums for the JOB in hand The alternatives don't bear thinking about. Each of us has our alltime favourite SRITH stories no doubt; As a girl I remember cutting up newspaper for use in the “smallest room in the house” and being told off by mum because the squares were too small… “But, I only have a small bum!” I said. My comment wasn't well recieved. In 7 words I had broken two rules; I had “answered back,” AND used a “bad” word. For my CHEEK I received a slap AND was sent to my room to await my father’s return from work. I’m don’t mean to wax lyrical about the room with 101 names, but, "The Smallest Room In The House" does seem to attract a whole set of socially acceptable behaviours one wouldn't normally expect of a room designed for privacy and contemplation, for instance: #1, The SRITH is one place where mother’s have the right to ask of eager little boys “have you been?” - “did you go?,” - “did you shake it?” Or - “did you wipe” - if you are a girl. #2, Lasses can pee in pairs and if they can squeeze into the cubicle at once, in 3‘s but this is most annoying if you are outside waiting with legs crossed #3, Partying girls and boys can take their glass of booze into the SRITH and no one bats an eyelid but to take a cup of tea of coffee would be considered rather, Infradig #4, Girls can and sometimes do, sit on the loo to pee with the door open and at the same time chat with friends and it’s ok…Yeah, yeah, yeah been there...LOL A number of things puzzle me about toilet paper…I can understand applying coloured floral print patterns to create an attraction to your SRITH decor BUT does quilting, embossing or other raised patterning serve a practical purpose…? To enhance the absorbency perhaps ? And finally, I hope it never changes; TOILET PAPER…A reel of perforated tissue wrapped around a cardboard tube… How can one improve on perfection
Posted by Bev at 5:49 PM 1 comment:

A Journey of Discovery

I'm so sad I grew up here. I could see this coast from my bedroom window. We still have land here and spend all our holidays here.

They look a bit weird but Brian likes them so why do they look like Sputniks? my thought is the mixture was too wet...thoughts please and a "fail-safe" recipe would be good

Yesterday and the weeks leading up to it my aches and pains have seemed more "in my face" than usual and I had aches in places I didn't even know existed, my back almost gave out twice and to cap it all I think I have gout in my big toes!!! what the heck is THAT all about

yes I've been a bit more down lately than usual but today I feel great; the sun is shining and yesterday is over.
Now I'm the first one to say don't wish your time away and we only have one life yadayadaya...but perhaps there is something about age that depresses the one doing the turning LOL you know what I mean right...Yesterday I turned 60 and although I thought I didn't care perhaps subconsciously I did? anyway as I said today is another day and I feel like I could take on the world.

My neice Sarah phoned first thing yesterday to wish her "munti" (it's what our neices and nephews call us aunties and all because Sarah when she was a baby couldn't say aunty) a happy birthday; in the background I could hear her 12 year old daughter playing with the baby. Sarah got the surprise of her life when she became pregnant again after 11 years but true to her nature she took it all in her stride and has already returned to work. I have great respect for that girl she has turned into a wonderfully thoughtful and caring young woman

Man it's been a "parky" winter here, there was another frost this morning; it doesn't keep Max from wanting to go walkies though. That dog is in for a shock come summer, he doesn't know it yet but he'll be back to sleeping outside...yes I do take him walking every morning uless it's raining...I don't mind being wet or being cold but I hate being wet AND cold together in one body. He had a sore tummy one night last week and kept me awake all night

but (and those of you who might be squeemish should turn away now) next morning his pooh was pure white. I put it down to too many bones...I TOLD Brian he shouldn't let Max have to many bones they are not food...

anyhow poor dumpling was okay next morning and we walked as usual.

Friend Karen and her hubby came down for my birthday and we went out for dinner. My food was okay but not hot enough, Brian said his was not worth writing about and Karen said her's was not cooked enough eh Karen

Thanks for making the effort by the way much appreciated

I wish we had taken a photo or two though. I have hardly used my camera and have to keep going on line to read the manual...why couldn't there have been the full paper manual

an online manual is no good when I'm out and about. No doubt I could buy one somewhere.

Whitebait season has started but I'm not going to hold my breath for a feed. Younger sister has been out there with her net and caught 1lb but her family comes first so fingers crossed for later in the season when I might get lucky

A Bit of a Ramble with Doughnuts

Funny my blogs aren't being transfered here from Multiply even tho I choose that option!!! 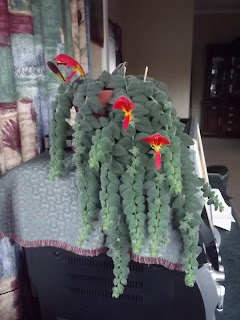 Finally the flowers have opened. They are quite weird; the reproductive organs look like the filaments of an electrical bulb. They must only open at night too as one minute there are buds next thing BOOM
The ash from Chile’s erupting volcano is disrupting NZ air space and more damaging earthquakes have occurred in Christchurch.

Liquefaction is the buzz word these days - it must be horrible.

You should have heard the rain the other night, it sounded like…well I’ve never heard a freight train before but I can imagine this is what it would be like.

I kid you not the noise on the roof was horrendous. Very scary. It sounded like a monster was trying to break into the house.
I know it's stupid but I lay awake listening for breaking windows. Brian slept through…he poor dear wasn’t well all last weekend; he didn’t eat for 2 days and slept all day and no he didn’t see the doctor, he wouldn’t …

Brian’s friend in England phoned, lol that sounds like he only had one friend, not so, anyway it’s always nice to hear from there and coincidentally I received a yesterday from England; it’s from someone I haven’t heard from in years. The death of our mutual friend must have spurred her to make contact.

My printer needs ink but it’s so expensive as to make me wonder whether it’s worth while! however I do need black for documents and thinking on it, it is nice to be able to print out photos when the urge takes you…I guess. 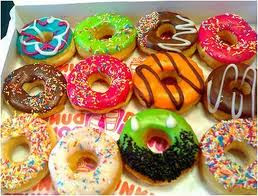 What is it about "Donuts"(USA) - "Doughnuts" (The rest of the world). Almost every crime/mystery book, TV show or movie involving police mention them. Officers and the press use them as bribes or bargaining tools!
It seems for a jammy or chocolate covered donut a detective would do almost anything
Moving on - last night before drawing the curtains I glanced out at a beautiful full moon.
A moonlit sky has a strange appeal don't you thinkmy sign (Leo) must be wrong, I am not a sun worshiper 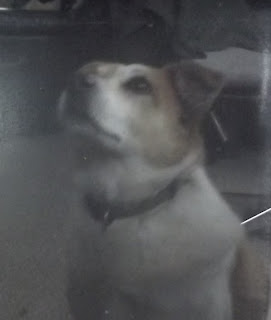 Max keeps putting his back paw into his mouth and chewing on it. Do you think he is biting his nails or maybe scratching his throat or, or what!!!
Anyway this morning as usual Max wakes me up 6.15 and off we go on our at least half hour walk around the still dim streets until eventually we are walking towards the moon positioned over what used to be known as "Hospital Hill"- these days although the hospital in a delapidated state is still there the hill is now known as Hikutaia Road...perhaps it always was, who knows and or cares, I still call it Hospital hill but I digress...

“WTF (I don’t know what those initials mean but they look good ay) WTF I think to myself, I’m sure it was a full moon last night.”
I’m looking up at the half moon and pondering and wondering if I'm going doolally so when I get home I say to Brian, “wasn’t there a full moon last night?” but he just looks blankly at me so I explain but he looks even more blank lol

“I don’t know,” I say. “Maybe I was mistaken or maybe we slept for a whole month but then wouldn't I be more hungry than I am now huh?” but Brian is eating his toast and just mumbles something about dreaming so I drop the subject.
Later I’m with my client in the shower when she says - how wasn’t it lucky the people down the South Island could still see the Lunar eclipse.

She’s as excited as I when I tell her I must have seen it too
Posted by Bev at 12:37 PM No comments:

Is this an Ikebana?

It looks Japanese; there is a mark underneath and some numbers but that doesn't help me much

Bev
New Zealand
I lived in the UK for 30 years but I'm home in NZ now. As I see it, it's my life. Touch, intermingle, influence even disrupt just play nice okay.